Please click on the name below to see the artwork in detail and learn more about its history.

The Grove of Righteous Rescuers 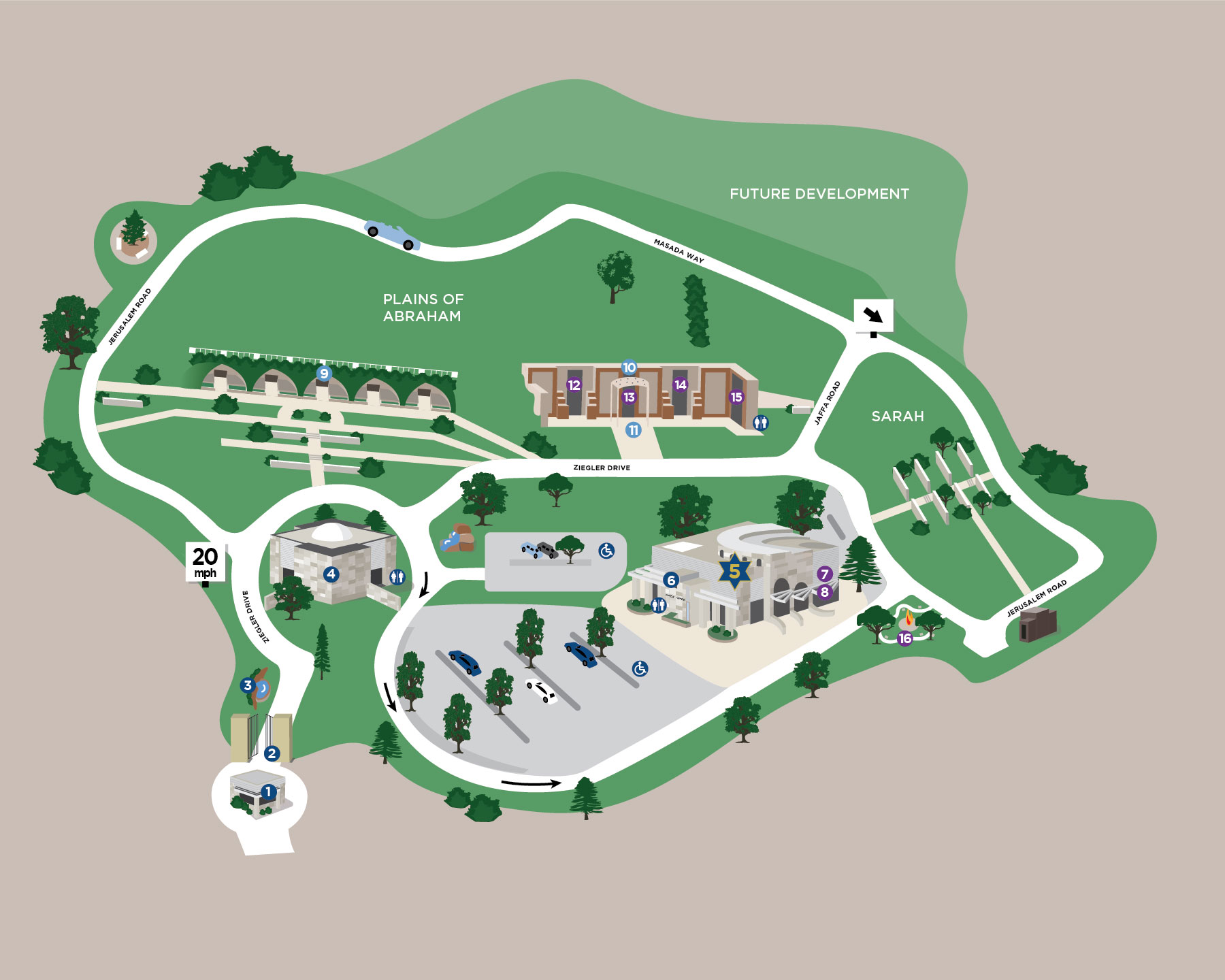 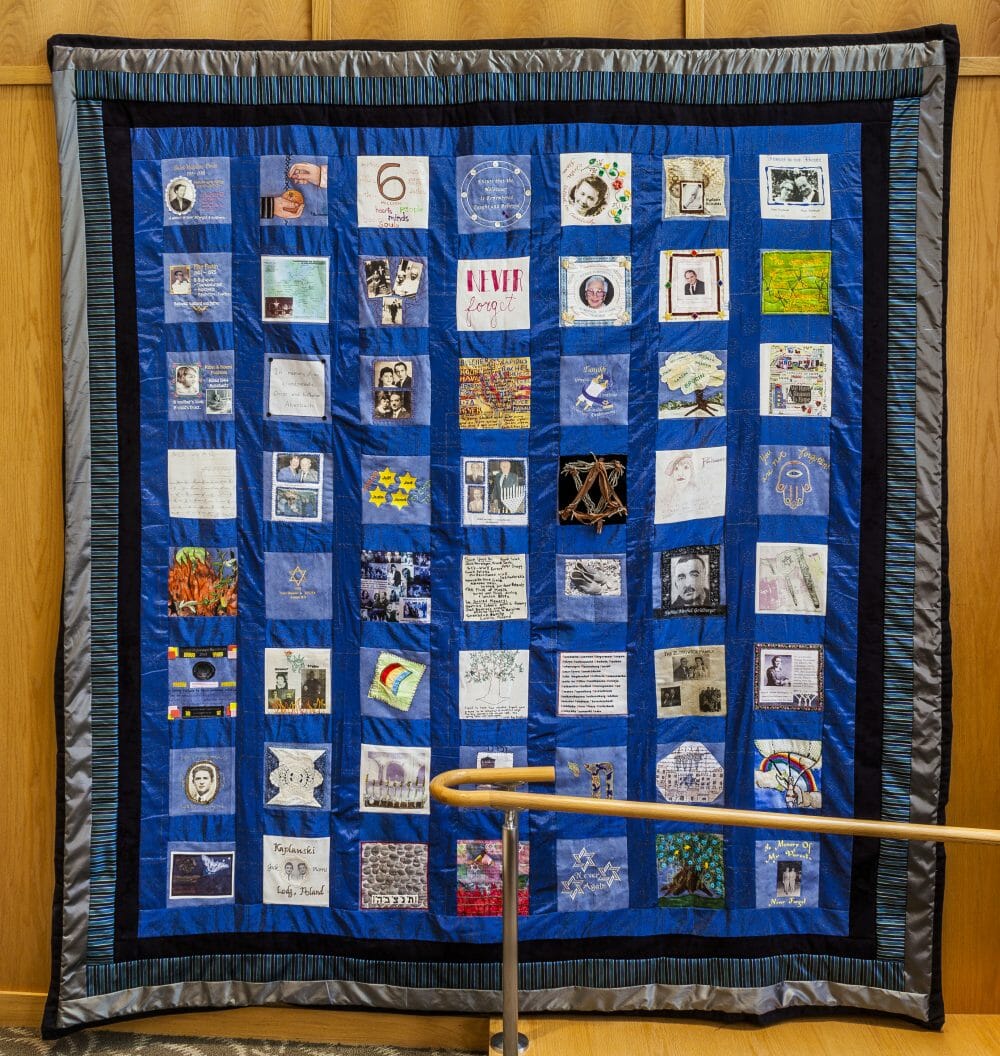 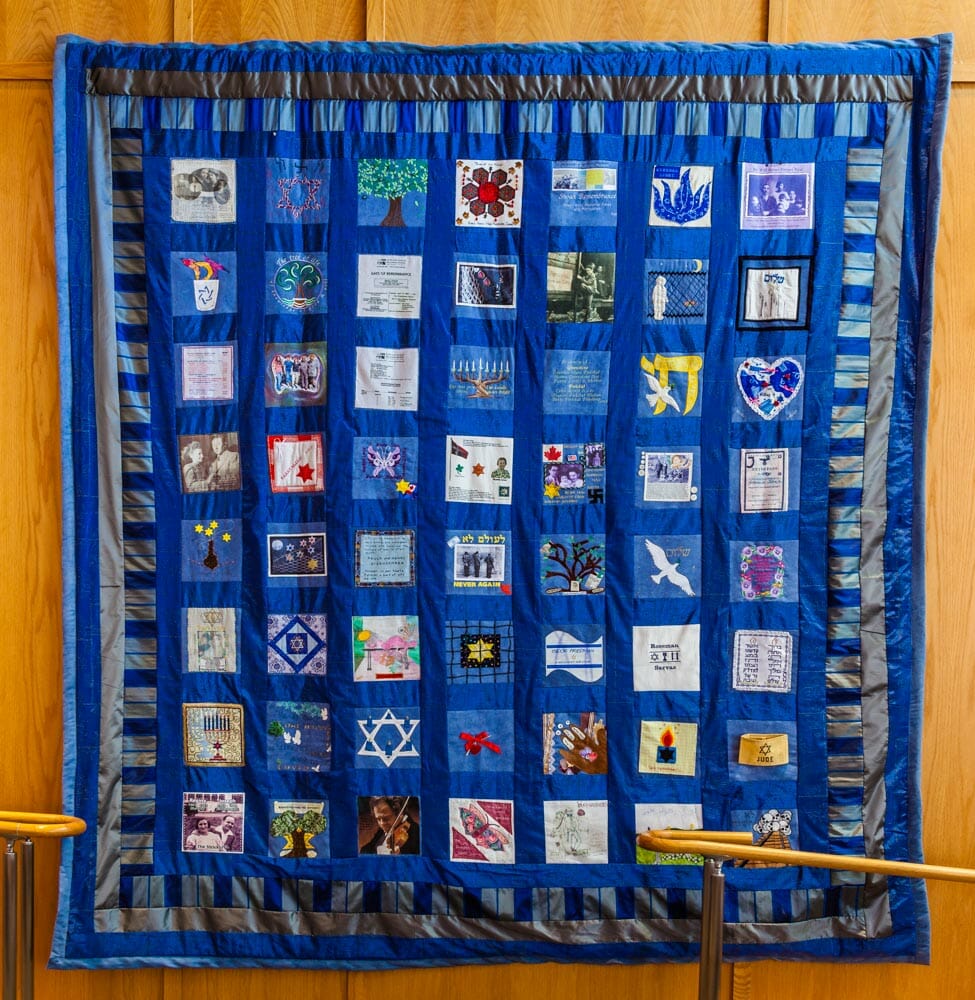 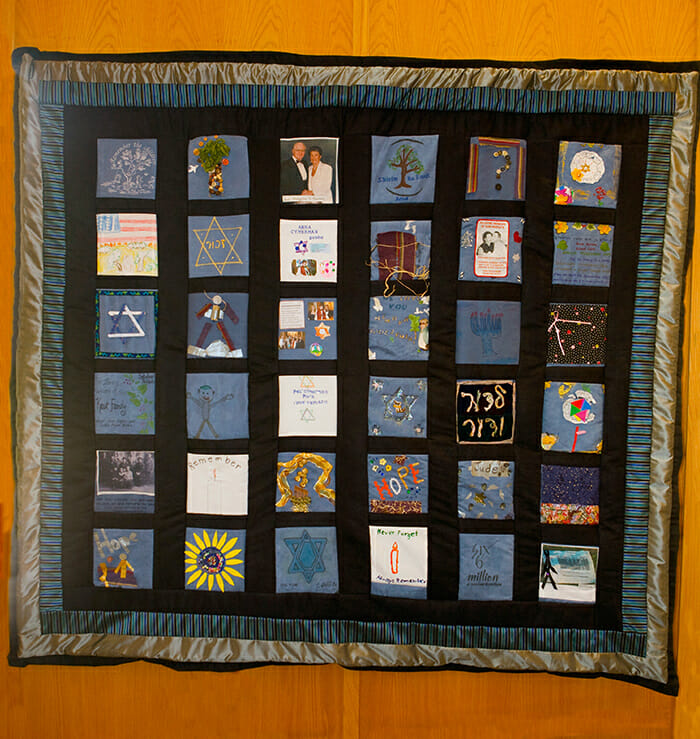 Three Quilts of Memories, adorn the walls of the Kamenir Chapel at Mount Sinai Simi Valley.  The Quilts of Memories were created in 2008 when Mount Sinai invited people to submit squares that commemorated or spoke to the Holocaust in any way they wanted.  The response was overwhelming and instead of receiving enough squares to create one quilt, Mount Sinai wound up with enough hand-crafted squares to create three quilts.  Each square is unique. Each one tells a story of tragedy and hope.

Click on each of the quilts below to see all of the details of each square.

Click Here to learn more about the Shoah Quilts of Memory

Entitled "Creation; The First Seven Days" the series of seven windows depicts each day of creation, represented with Hebrew letters, colors and background images. The colors of the letters, red through purple, reflect the spectrum of the rainbow, the symbol of hope in the biblical story of the flood.

It took Merritt almost a year to study and develop the theme for the Kamenir Chapel’s seven windows. Early on, she settled on the concept of the creation story with the largest window representing Shabbat. When she finally started sketching, it took only two weeks to get from the first rendering to the finished drawings.

Merritt said she had to walk a fine line when using imagery in the windows so as not to offend the Orthodox community while still conveying the narrative. She settled on using Hebrew letters as the primary imagery, although she believes that symbolic art is a part of Jewish tradition. 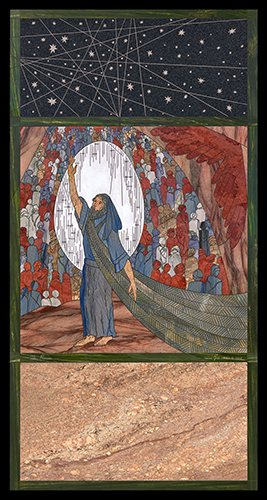 The Promise, features Abraham as the central figure, reaching up to indicate his relationship with God as God promises  that his progeny will be as numerous as the stars in the sky and as grains of sand in the seashore. The multitudes of his future generations, visible on either side of him, create the shape of the egg.

Promise. In this mural we have Abraham as the central figure, reaching up to indicate his relationship with G-d, and the multitudes of his future generations, visible on either side of him, create the shape of the egg. This was perhaps the easiest of the designs that come together pretty naturally after all the other three were developed. Though this is where the story begins, in our process it became the culminating design and the one that pulled it all together.

The Open Tent features Abraham and Sarah welcoming in the messengers. Sarah is holding up the tent with one hand and Abraham is greeting and welcoming the guests with his hand.

The central section tells the story and the section above provides the starry sky and the bottom section the grains of sand.  These components all reference the initial promise that God made to Abraham that his progeny will be a multitude as the stars of the sky or as grains of sand. 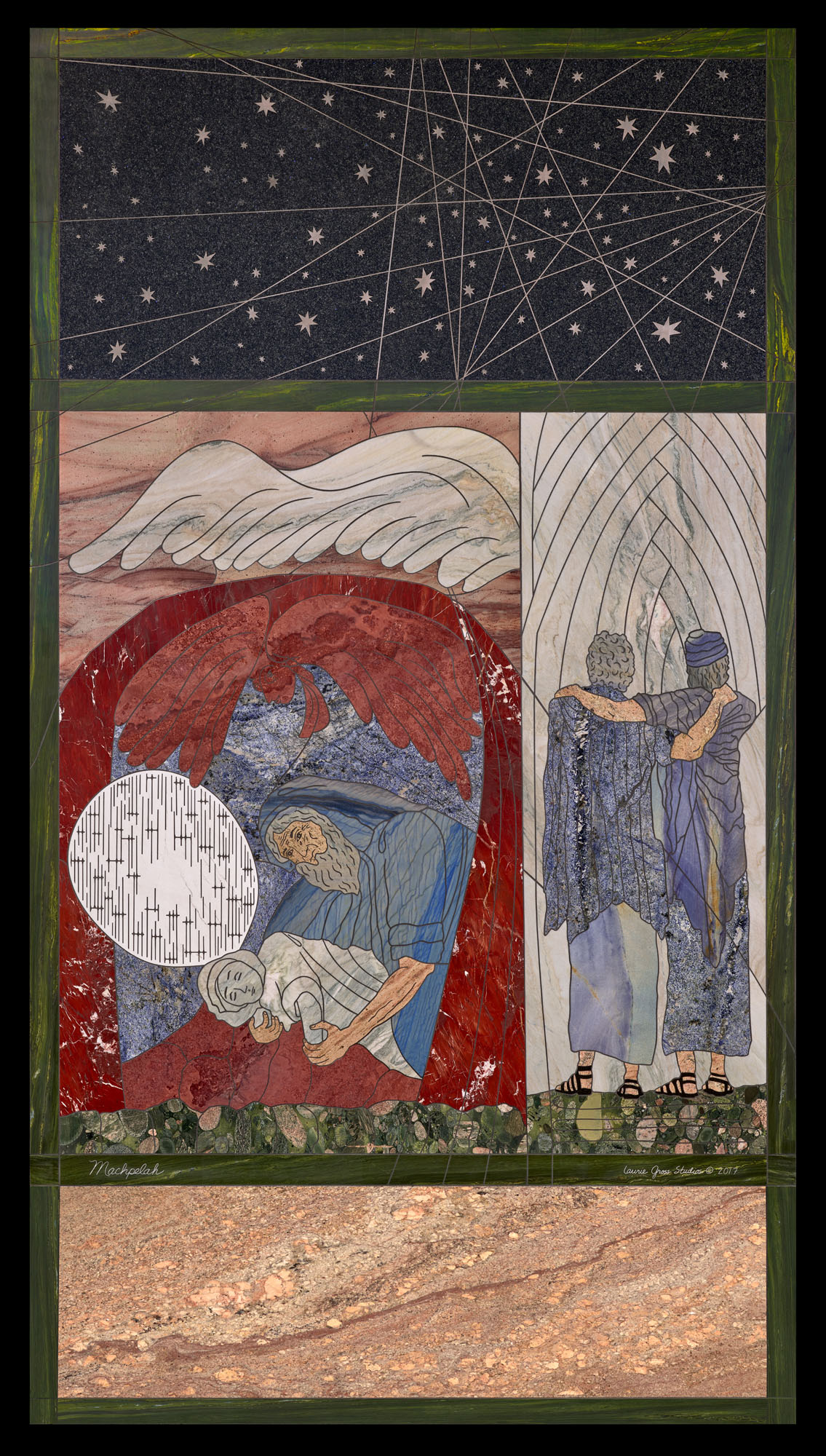 Machpelah depicts Abraham lovingly holding Sarah's body as he prepares for her for burial at Machpelah with an angel hovering. Above the cave opening is another hovering wing which represents the presence of Schehina. To the right are the two brothers, Isaac and Ishmael, as they came together to bury their father Abraham.

Note that the gray and white material chosen for Sarah's heart and the area  above the brothers' heads is is the same shade of pink quartz. This matching color indicates that Sarah’s heart was present, perhaps in a protective way, in the brother's reunion.

In the story, Sarah is not present and we do not again hear her voice. however, in this mural, Sarah is given a role.  The stone color we chose for Sarah’s dress now becomes the stone choice for the angel. Sarah is present through our angel, stopping Abraham from this unspeakable act.

The Grove of Righteous Rescuers 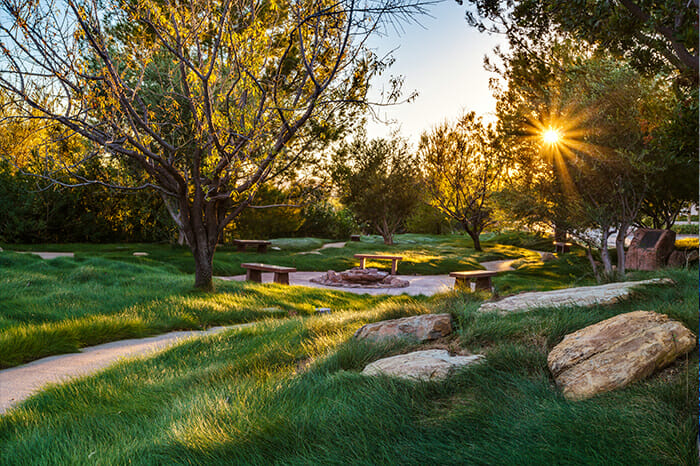 This thought-provoking secluded arbor, adjacent to the Kamenir Chapel, is dedicated to the many non-Jews, who at risk to themselves and their families, rescued and hid Jewish men, women and children as they fled from death at the hands of the Nazis. As part of our history and in respect for their bravery, we are proud to honor their memory and make them a part of our own communal past.

We encourage all who visit to pause and reflect upon the 40 tablets representing 40 nations whose citizens helped Jewish people escape Hitler’s regime. The Grove of Righteous Rescuers is always open for silent meditation.  Click Here to learn more about the Grove of the Righteous Rescuers. 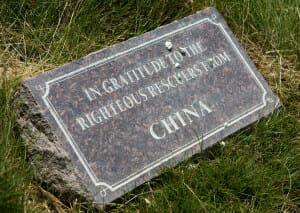 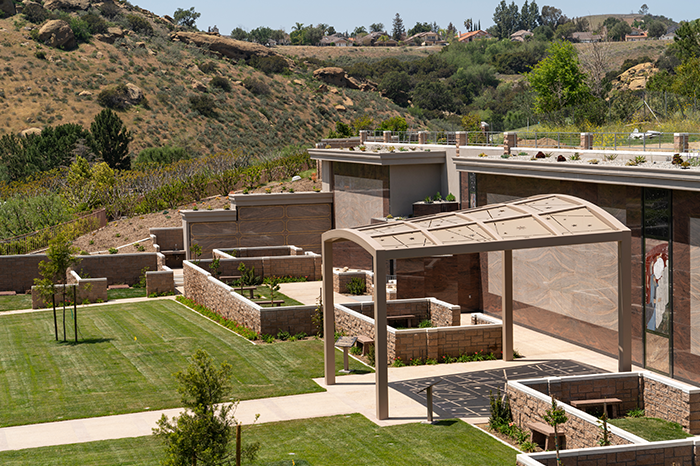 In recognition of Mr. Mandel’s many years of service as Chairman, his peers on the Cemetery Management Committee of Sinai Temple deemed it fitting to dedicate an area in his honor at Mount Sinai Simi Valley and designated the central area of The Courts of Abraham to be named Mandel Plaza.

Visitors to The Courts of Abraham stroll through Mandel Plaza and pass under its distinctive steel and aluminum shade structure which was designed to represent Abraham’s Tent from which Abraham and Sarah offered hospitality to all.