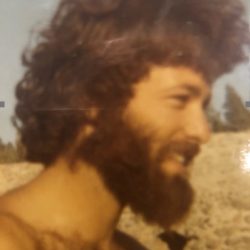 Yaniv Dotan was born in Afula, Israel on October 30th, 1947 to Ruth Gefen Dotan and Arieh Dotan. He was the middle child. His father had an older son from a previous marriage, Asaf (who was sadly killed by friendly fire in the Israeli army) and a younger brother, Amnon.
He was mostly raised on Kibbutz Ayelet Hashahar. with the old Kibbutz system of children living apart from their parents, in dormitories with other children of the same age. This childhood experience led him to crave and need his own space and privacy, traits he carried with him throughout his life.
Yaniv graduated with a Bachelor’s degree in Biology from the Hebrew University in Jerusalem in 1975. He later went on to earn a Master’s degree in Neurophysiology from Hadassah Hospital, specializing in Electro Anesthesia under the tutelage of Dr.Joseph Magnis. After he completed his thesis and earned the degree, he realized he was not cut out for vivisection and left the field.
Yaniv moved to the United States, with his then-wife, and enrolled in the Engineering School at USC and got his bachelor’s degree in 1982. From there he was hired at Aerojet Electrosystems in Azusa as an Engineer.
While he was working, Yaniv went to night school at California State University of Northridge to earn yet another Master’s degree in Engineering. He completed that degree in the late 80’s.
He began his PhD studies in Atmospheric Sciences at UCLA, but his work and family commitments (he now worked at Aerospace Corporation) made continuation towards the degree very difficult, and he left the program.
Yaniv was a Talmudic scholar, spending his free time reading the Old Testament, as well as Kabbalah, and the Talmud. He spent every Monday evening with his then father-in-law, studying and debating and learning these books, as well as engaging in the religious interpretations of his late father-in-law, Sandor Sigmond.
As he advanced in age, and largely because of the teachings of Sandor, Yaniv made the decision to enter into the Rabbinate. He enrolled in a Rabbinical program where he hoped to graduate and begin a second career within his Jewish faith.
Yaniv passed away on Monday, May 3rd, 2021 at 11.50pm after a courageous battle with a blood disorder. He leaves behind his son, Jonah Lee Dotan, his companion of many years, Sandra Messamishii, his brother Amnon Dotan, his sister-in-law Beth Dotan, niece, Liatte, nephew Yonatan, former-wife Suzie Dotan, as well as cousins and other family in Israel.