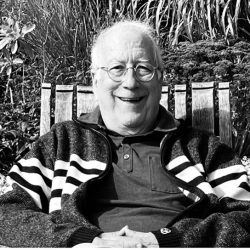 Stu Brower of Pasadena, New York City & Boothbay Harbor, left this world as he had lived, surrounded by those who loved him dearly.  The only child of Morris & Fay Brower, he was born in Long Beach CA, attended Millikan High School where he was inducted into the NHS and, as a gifted clarinetist, he was selected to the All-Southern CA Band.  He was awarded a full scholarship to USC, was the station director of KUSC, inducted into the Alpha Epsilon Rho & Phi Beta Kappa Honor Societies.  Stu served his country in the California Air National Guard,146th Airlift Wing. He then worked as a Page for the Ed Sullivan Show at CBS and single handedly ensured Mick Jagger made it onstage after going missing right before showtime.  After receiving an MA in Television & Radio from Michigan State University, he embarked on a 50+ year career in entertainment marketing. As Vice-President of Marketing at ABC, he launched countless signature series and spearheaded many legendary, industry-defining campaigns, including Love in the Afternoon, Still the One, Come on Along, Now is the Time, and You and Me and ABC. Recognized for his creative contributions, Stu was the recipient of the Promax Lifetime Achievement Award.  He will be forever remembered for his selfless mentorship of hundreds of people who worked with him and for him. As a result, they rose to the top of their careers with Stu to thank for giving them a chance, a second chance, and guidance on how to become the best versions of themselves.  His love for “luncheon” with friends was one of his favorite activities and he did it as often as possible.  He was eternally grateful for the gift of a kidney and was a generous supporter of many charities including, Donate Life America and PDK Cure.  Baseball, Broadway, Boothbay Harbor and the buying and selling of real estate were a few of his other passions which he was able to fully devote his time to after retiring in 2018.  His podcast, Stupefied, was another way for him to share stories, his life adventures and have a little fun at everyone’s expense (now available for your listening pleasure).

Funeral services will be held on Sunday, May 22nd at 3p; Tanach Chapel at Mt Sinai Hollywood Hills Forest Lawn. There will also be a webcast link provided prior to the event for those who would like to attend virtually.  All who cherished Stu are welcome to attend.  A celebration of life will be announced in the coming months. Donations in his memory may be made to www.donatelife.net and www.pkdcure.org