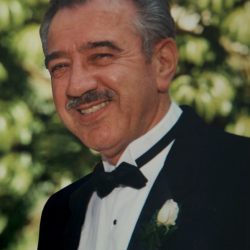 Sol Rattner was born on February 1, 1929 in Drohobycz Poland. He fled the Nazis with his parents, Samuel and Bella, and his younger brother, Majer, ending up in Russia in a displaced persons camp. He later worked on a collective farm near Stalingrad before being sponsored by a cousin and moving to San Diego. Sol served in the Army during the Korean War and was stationed in Germany. Returning to San Diego after his service, he met his bride to be, Tova Goldwasser. Tova herself had survived Auschwitz, traveling after the war to Israel, then to San Diego after learning her sister too had survived and moved to the US. They married in 1958. Sol and Tova moved to Los Angeles, where they raised their children. Sol and a partner bought a liquor store in Glendale, where he worked for more than 30 years, becoming a beloved figure in the community. After selling the store and retiring, he devoted his time to his friends and family. He delighted in seeing his grandchildren, Noah, Maya, and Jake, on an almost daily basis. Sol adored, and is survived by, his wife, Tova, brother, Majer, children, Donna (Michael) and Larry (Elizabeth), grandchildren, nieces, nephews, grandnieces and grandnephews. Services will be held at Mount Sinai Memorial Park on Tuesday, May 25 at 3pm. Donations in Sol’s name may be made to American Jewish World Service, or an organization chosen by the donor.