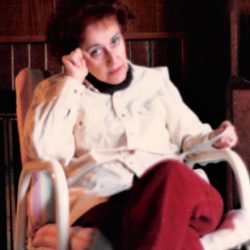 Shirley graduated from Scranton Central High School in 1945 and attended New York University. She was a bookkeeper for her father’s fish business located at the west end of the former Wholesale Block of Lackawanna Avenue. She later used her bookkeeping skills at Catskill Mountain summer resorts and in her employment in Baltimore.

She married Joseph L. Goodman on April 15, 1951 at Temple Israel in Scranton, a marriage that would last for 67 years. The couple moved to Maryland living in Baltimore, Rockville and Silver Spring, MD. before moving to Riderwood Village Retirement Center. Their last move was to Sunny Village Care Center in Alhambra, CA, where Mr. Goodman passed away on Nov. 22, 2018 at the age of 92.

Shirley was an avid bridge player, belonging to weekly and monthly bridge clubs for decades. In retirement, she played bridge up to five days a week. She was an active member of the Washington, D.C. chapter of Parents and Friends of Lesbians and Gays (PFLAG) and served many years as the group’s treasurer.

She is remembered as a devoted wife, mother, grandmother, aunt, and great-aunt. In addition to her husband, she was predeceased by a son, Harold Goodman of Santa Cruz, CA., a brother, Harold Wiesenfeld of Scranton, and a brother- and sister-in-law, Henry and Anita Goodman Pisarz of The Bronx, NY.

The family wishes to thank the staff of Riderwood Village, Jewish Social Service Agency Hospice of Rockville and Sunny Village Care Center for the excellent care given to Joe and Shirley.

A small funeral service for family members will be held at the Garden of Remembrance Cemetery in Clarksburg, MD. The Hines-Rinaldi Funeral Home in Silver Spring, MD. is handling funeral arrangements. A memorial service will be scheduled at a future date. Donations in Shirley’s memory can be made to Hadassah at hadassah.org.