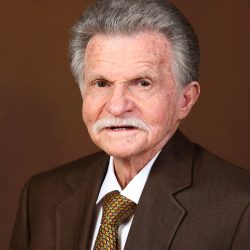 Ruben was born in Cordoba, Veracruz (Mexico) and was raised in Mexico City. He attended the Universidad Nacional Autonoma de Mexico where he obtained his undergraduate degree in Civil Engineering in 1955. In 1958, Ruben completed master’s degree programs in Civil and Structural Engineering at Rice University in Houston, Texas.

In 1962, Ruben moved his young family from Mexico to the United States. This ambitious relocation was symbolic of the pioneering and entrepreneurial spirit that defined Ruben throughout his entire life. He established his first home in Los Angeles and embarked upon an extremely dynamic and successful, fifty-seven year, career in construction and real estate development.

In 1976, Ruben married Phyllis Daneman and together they shared nearly forty years as husband and wife. During their life journey, Ruben and Phyllis dedicated their time to raising their seven children together, connecting with their friends and enjoying their many shared passions, including: world travel, antique collections, attending theater and musical productions, and cheering on their Dodgers through thick and thin.

Throughout his professional career, Ruben designed, built, managed and acquired real estate projects in every product category through his business, Barclay’s Realty & Management Company. He was a hands-on developer and business operator who endeared himself to everyone with whom he interacted given the incredibly warm and truly authentic manner in which he handled his business affairs. Ruben was an “old-school,” high-integrity deal maker who simply loved the excitement and energy of all of the transactions in which he was involved. By working tirelessly and endlessly, he earned the utmost respect, trust and confidence from countless industry professionals for nearly six decades.

Within the community, Ruben was actively and passionately involved in a number of initiatives and organizations to which he generously gave of his time, treasure and talents. Ruben held significant leadership roles at Cedars-Sinai Medical Center (Board of Governors and Construction Committee for the new medical center), Sinai Temple, Mount Sinai Memorial Park (Cemetery Management Committee), Stop Cancer, Tamarisk Country Club (President) and Century Woods. From participating in and contributing to many annual and event specific fund-raising campaigns, to taking on lead roles in some of the most critical operational projects, Ruben always gave of himself in the most heart-felt and humble manner.

Ruben brought a magnetic and lovable energy to all of his personal and professional pursuits and to all of the relationships he established with friends around the world. His quiet strength and determination, coupled with his benevolent, kind, generous, tender-hearted and selfless spirit, made for a truly formidable combination. Ruben was a loving husband, a loyal friend, a champion of the least fortunate, and an exemplary father and grand-father. Ruben lived an incredibly full and rich life and made an indelible impact on the hearts and minds of everyone whose paths crossed his during his blessed lifetime.

The family wishes to acknowledge Dr. Gregory Sarna, Eileen Brown (RN) and the entire medical and administrative team at Cedars-Sinai for the wonderful care that they offered Ruben not only over the past year-and-a-half, but during Ruben’s first battle with cancer thirty two years ago.

In honor of Ruben’s life and the beautiful memories he has left us all, the family requests those desiring to make donations to direct them to either Cedars-Sinai Medical Center or the Tower Cancer Research Foundation.