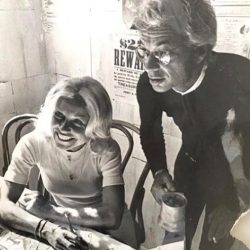 March 11, 1925 – January 15, 2021 Norma Jean Fink, a fashion trailblazer who defined the quintessential California lifestyle aesthetic that endures today and was instrumental in transforming Rodeo Drive from a sleepy Beverly Hills street into a world-renowned fashion destination, has died at 95.

Norma arrived in Los Angeles at 14, moving from Philadelphia with her family, the Brandts, in search of better opportunities following the Great Depression. She attended Hollywood High School, was a regular on the beauty pageant circuit and was crowned Miss Las Vegas in her early 20s. Norma was a natural-born performer who lit up every room. She lived to dazzle a crowd.

She met her husband Herbert Theodore Fink on a badminton court located at Gower and Sunset. Though he caught her eye with his Sinatra good looks and edgy style, he didn’t make the best first impression on her parents: “He was maybe a little too cool,” she told Los Angeles Magazine in 2004. “Slouched on the sofa instead of sitting straight up. He wore suede shoes with buckles — no one was wearing buckles.” He added that, “She’d been told terrible stories about me. She liked what she heard. It sounded interesting.”

They married in 1948 and together they built what was celebrated by the press as the Fink fashion empire, shaping the retail landscape for decades. They were a charismatic pair who turned heads, with attitude and style, smart instincts, a sharp eye, and sharper opinions.

They started with a small boutique called Country Club Fashions in Reseda, with an approach that was so unique, they attracted customers from over the hill — a schlep that meant the ultimate stamp of approval. C.C.F. expanded into a chain of 12 stores, and that was just the beginning.

During a buying trip in France in 1968, a fateful lunch in St. Tropez led to an epiphany. Taken by the distinctive look and lifestyle of Europe’s affluent leisure class, they decided to open a new store that captured the spirit of the French Riviera town. They found a spot on a quiet Beverly Hills street, notable for its easy parking, and called it Theodore.

Theodore became an absolute sensation, a landmark boutique that established California’s high fashion casual style and championed European designers before they were superstars and household names. The store drew lines of customers and the front window was frequently covered in nose prints from people peeking in to see the scene. The tremendous success of Theodore, along with a few other pioneering retailers, not only put Rodeo Drive on the map, it also turned the street into a world-renowned fashion destination.

Herbert and Norma discovered Dolce & Gabbana, Versace, Jean Paul Gaultier, Alexander McQueen, Roberto Cavalli, Ann Demeulemeester, Armani and Issey Miyake, among many others, and they eventually had nine Theodore locations across Southern California as well as two standalone stores dedicated to designers Sonia Rykiel and Claude Montana, also on Rodeo, and Contents by Theodore, a younger concept and unisex store in the Beverly Center.

When Norma was 45, she launched her own clothing line, first called d.b.a. (By) Theodore and later renamed to Changes, and she was recognized by the fashion press as an innovative California designer for her idea-filled collections. In addition to a design studio and showroom on La Cienega between Melrose and Beverly Boulevards, she also had a showroom in New York and her collection was carried in top-tier boutiques across the country. In its last iteration, the line became TDS (Theodore Design Studios) and was sold exclusively at Theodore. During this time, she headed up the California Contemporary Group and helped turn the state, and Los Angeles in particular, into a new mecca for design in America.

If it sounds fun, it’s because it was, and they had the nonstop glamorous lifestyle to match — with their own tables at Spago and The Ivy (“that’s where you maneuvered things”), fashion shows in Paris and Milan, and memorable parties at their Bel-Air home. How to work a room, if you were wondering? “It’s all in the wrist,” Norma said.

They had three daughters, Leslie, Tracy and Lisa, vibrant, creative and strong sisters who learned the ropes at an early age and became a vital part of the business. As a favorite Fink family expression goes, “The apple doesn’t fall far from the tree.”

Norma told the most colorful stories, many of them wildly inappropriate, to the endless delight of her grandchildren. She could talk and talk and talk, and they hung on her every word. Never have you seen a bunch of grandchildren who worshiped their grandma like this crew — and the feeling was mutual.

Norma cared deeply about civil rights and her fashion shows were notable for their celebration of diversity. She also worked on a number of charities, including Cedars Valley Guild for Children, raising funds for pediatric care; the Foundation for the Junior Blind, where she taught tap dancing; and APLA Health during the scourge of the HIV/AIDS epidemic. She later devoted her energies to the Israel Cancer Research Fund, becoming chairperson of the organization’s Women of Action and receiving the Lifetime Achievement Award in 2006, presented to her by fellow Rodeo Drive legend Fred Hayman. She was also a fierce supporter of President Joe Biden.

Norma is predeceased by her husband Herbert Theodore Fink (April 21, 1923-February 18, 2017). She is survived by her daughters Leslie Le Tellier, Tracy Fink and Lisa Davis; grandchildren Alexandra, Miles, Sebastien and Lily; and a great granddaughter, Margaux.

She is buried at Mount Sinai Memorial Parks and Mortuaries. In lieu of flowers, donations may be made to the Alzheimer’s Association.