If you will be attending a funeral service at Mount Sinai and are not familiar with our Jewish funeral traditions and customs,
we encourage you to visit our FAQ page to learn the answers to some of the most frequently asked questions.

Click here to order or send flowers from our on-site florist.

Michael Aaron Michner was born the youngest of four children to Lou and June Michner on May 22, 1959 in Fresno, CA. Diagnosed Deaf at 5 months old, this discovery charted the course of his life-advocating and supporting Deaf people around the world.

Considered a “mensch” by colleagues, friends and family, Michael defied all odds by becoming the first Deaf person in Fresno called to the Torah to be bar mitzvahed in 1972. A 1978 valedictorian at Bullard High School, Michael went on to California State University, Northridge (CSUN) where he obtained his Bachelor of Science degree in Business Administration with an emphasis in Accounting Theory and Practice in 1982.

He continued the Michner legacy started by his grandfather, Morris Michelson, in becoming a Certified Public Accountant (CPA). Michael obtained his first job at Price Waterhouse, one of the largest accounting firms in the world. He then worked for Nelson, Nelson & Berger, a local Fresno CPA firm. In 1986, Michael became one of the three Deaf CPAs in the United States.

In the September 1986 issue of Network News published by Network of Total Health Care Community Hospitals of Central California, honoring Michael, his colleague commented, “One thing about Michael, he makes you realize that you can do just about anything if you make up your mind. He took a minus and made it into a plus.”

Michael, gifted with numbers, ran an extremely successful CPA business for over 30 years, carrying a large clientele of loyal customers. He had extensive involvement with local and national non-profit organizations. This lead him to his most recent position as the finance manager for Public Counsel, the nation’s largest non-profit law firm specializing in pro-bono legal services for more than 20 years.

A bar mitzvah, Michael upheld his duty to serve others. He gave his time to numerous organizations as a board member, Chief Finance Officer (CFO) or as CPA: The National Association of the Deaf (NAD), the Greater Los Angeles Agency on Deafness (GLAD), Deaf Counseling Advocacy & Referral Agency (DCARA), Deaf & Hard of Hearing Service Center (DHHSC), KODAWest, Deaf West Theatre (DWT), California Educators of the Deaf (Cal-ED) United Cerebral Palsy of Central California (UCPCC), Writers Guild Foundation and the California’s Women Law Center among many others.

When being honored by Fresno State in 2016, Michael remarked “It’s never an easy road to be a deaf person in a hearing world. I have never been ashamed of myself for being deaf. I tell people that my hearing loss is just a minor thing and that everyone has a handicap. There are always obstacles to overcome. Deaf people need to know they are capable of achieving more than they believe.”

Through mutual friends, Michael met the love of his life, Amy Rubin, in the San Fernando Valley and embraced her two sons, Aaron and Adam as his own. They married in Las Vegas on May 14, 1994. After settling down in Northridge, CA, daughter Ariana was born in 1999, who became another source of his pride and joy. This past May, Amy and Michael celebrated a beautiful 25 years of marriage.

Michael’s greatest devotion was to his family. He was an adoring husband, often taking pride in his wife and her talents. He became a father figure to his two sons, raising them to make sure they had the tools to succeed. Michael passed on his love for numbers to his daughter, mentoring her to continue “the Michner legacy” in accounting.

Michael was a teacher at heart, gifted in many ways which he shared with those around him. His gregarious hugs and warm smiles attracted friends everywhere he went. Michael was the epitome of goodness. Always genuine, kind and giving, he welcomed many into his home, which became a sanctuary and a place of celebration.

On Friday August 16, 2019, after a short bout with kidney cancer, Michael passed away peacefully, surrounded by his loving family. He is survived by his wife, Amy; his three children, Ariana, Aaron and Adam: and his brothers Stan (Barbara) Michner, Richard (Connie) Michner, and sister Jeri (Lee) Horwitz. He is also survived by his parents-in-laws Dorothy (Jules) Burg and Richard Rubin as well as his many nieces and nephews.

Michael Michner was beloved by many and will be profoundly missed by all who knew him. We can never forget the marvelous “Michner Meatballs!” and his affinity for plaid shirts. In lieu of flowers, a memorial fund has been set up to support causes Michael was passionate about. https://www.gofundme.com/f/the-michner-legacy 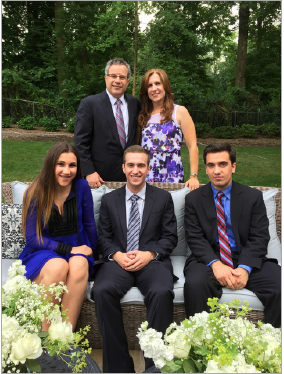