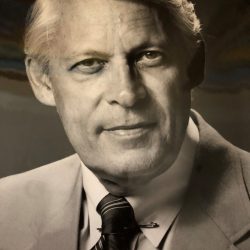 Melvin Weber passed away peacefully on January 5, 2020 at the age of 96. He was born in New York City on September 20, 1923 to Eva (Dubin) and Sam Weber. Mel grew up in Brooklyn and graduated from Erasmus High School. He was drafted into the army and assigned to basic training at Camp Kilmer, New Jersey where he met his future wife, Pearl (Goodfriend). Upon completion of his training, he was given a government scholarship to Bowdoin College in Maine. He was later shipped out to France, where he served as a medic in the Normandy Invasion. He returned home at the end of the war to marry Pearl in 1946. Mel began his career in the retail clothing industry, starting as a salesman for Hart, Schaffner and Marx. He rose up through the company to become president of Baskin in Chicago and president of Wallach’s in New York. Prior to retiring he fulfilled his dream to have his own menswear company, Lew Ritter, in Beverly Hills. Mel eventually retired to Palm Desert where he gave lectures in retailing and started a book and current events club. Mel had a lifelong love of reading and a wickedly funny sense of humor, often quoting about life, “You have to laugh.” He was survived by his beautiful wife of 73 years, Pearl, who passed away five months later. Mel was beloved and adored by his family and was a major source of advice and support to all who knew him. He is survived by his two children, Janice Sostrin (Robert) and Robert Weber (Alexa), four grandchildren, Jennifer Reiss (Adam), Adam Sostrin, Rebecca and Alexander Weber, and two great grandchildren, Brooklyn and Skylar Reiss. He also leaves behind his brother-in-law Herb Goodfriend, sisters-in-law Phyllis Goodfriend, Stefanie Weber and their families. He is predeceased by his two sisters June Weber and Gloria Reisher, his-brother-in-law Edward Reisher and his recently departed brother Harvey Weber.