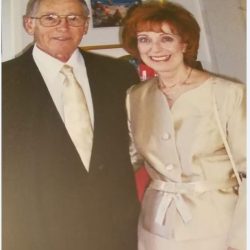 Judith Lipson Goldstein passed away June 23, 2020, at the age of 87, following a brief illness.
Judi was born on January 16, 1933, in Boston to a commercial artist father, Ben, and an entrepreneurial mother, Sadie.
She was always a straight A student, double promoted twice during her grammar school years, and would become physically ill during summer vacations because she missed the classroom so much. Even to this day, she continued to take classes at Pierce College near her home. She graduated Boston University Summa Cum Laude in 1954.
In late 1954, while working for a classical music radio station, she met a young record company executive named Irwin B. Goldstein and they were married six months later, in May, 1955. Irwin passed away in December, 2012.
She spent much of her adult life doing charitable fundraising work primarily for City of Hope.
She was very devoted to her family, including her three sons, Stephen (Jennifer), David Miles (Michelle) and Kenneth (Leslie), six grandchildren, and nine great-grandchildren, with one more on the way. She was also much beloved by her many nieces and nephews, and her surviving siblings in-law.
Services will be held at Mount Sinai Memorial Park, Los Angeles, on Friday, June 26 at 1pm. The family requests that in lieu of flowers, donations be made in her memory to City of Hope.