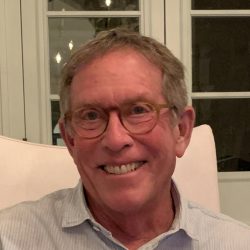 Jerome (Jerry) Muchin passed away unexpectedly at age 75 on March 21st at his home in Marina del Rey witLh the love of his life Carol by his side. College sweethearts, Jerry and Carol built a life together after meeting at the University of Wisconsin, and had 52 wonderful years of marriage. Jerry was a deeply devoted husband, father, and grandfather, and he spent his life adoring Carol and their family.

A successful businessman, Jerry retired at a relatively young age, and he and Carol spent the last 20 years enjoying the company of family and friends, as well as experiencing the many wonders of the world. An avid single digit golfer, he and Carol enjoyed playing golf at signature courses on many continents, as well as at his home course, Hillcrest Country Club. He loved the ocean, and was still body boarding, snorkeling and picking up shells on the beach with Carol.

Jerry volunteered to help organizations that could benefit from his vision, guidance and mentorship. As a passionate member of the Board of Directors for Mychal’s Learning Place, he helped them expand their mission of providing the support, training and opportunities to youth and young adults with developmental disabilities to build their independence and pursue their goals and dreams.

Born in Milwaukee, Wisconsin, Jerry was the second son of Libby and Alvin Muchin. Jerry is survived by his older brother Danny and his wife Natalie, and his younger sister Nadine and her husband David Prosperi. He is also survived by his children and grandchildren: Michael and Emma Muchin, and their children: Bailey and Scott Frankel, Lia and Jordan; Neil and Andrea Muchin, and their children, Coby and Ben; Jonathan and Jackie Mates-Muchin and their children: Teddy, Leo, Josie, and Sidney. He also leaves Carol’s brother and sister-in-law, Charles and Karen Rosin, and so many loving nieces and nephews.

The family is devastated by Jerry’s sudden passing. His warmth, friendship and compassion will be missed by all who had the good fortune to know and love him. A small, private family service will be held on March 24th. Donations in Jerry’s memory may be made to Mychal’s Learning Place or other worthwhile causes.