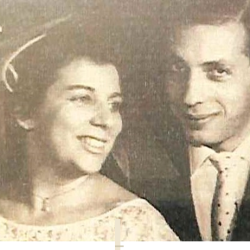 Jay Krueger passed away peacefully on July 29, 2021 in the presence of his children, Steve Friedland, Scott Friedland and Allyson Krueger.

Jay Stanley Krueger was born to Max and Jess Krueger in New Jersey on December 30, 1934. Jay graduated Seton Hall University in June 1957 and left immediately for California where he spent the rest of his life.

Soon after arriving in California, he met Gloria, the love of his life. Together they enjoyed a life of pursuing passions, which included training and showing black Labrador Retrievers (a total of eight). They were among the founders of the Labrador Retriever Club of Southern California. Jay and Gloria enjoyed family vacations camping and traveling around the west. Along the way they visited the Navajo and Hopi reservations in Arizona and New Mexico, which ignited an interest in American Indian art and culture. Throughout their lives they continued traveling, including to celebrations of art and culture at the Heard Museum Guild Indian Fair and Markets in Arizona, the Indian Markets in Santa Fe and New Mexico, and the grand opening of the National Museum of the American Indian.

Jay worked in the Child Support Investigation Unit of the Los Angeles County District Attorney for over 25 years. After retirement, Jay and Gloria moved to Laguna Woods and made many friends.

Jay loved his brother, Sheldon Krueger and his sister, Arlyne Crow who survive him. He is also survived by his grandchildren, Zara Friedland Jennings, Rachel Friedland, Daniele Friedland and Sean Friedland and his great grandchild, Nicolas Friedland.

Jay was a loving father, brother, uncle, grandfather and friend. He now rests with Gloria at Mount Sinai Memorial Park.