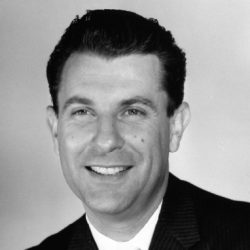 Jules Melvin Formaker died August 4, 2021, at the age of 95. The son of Fannie and Bernard Formaker, he was a native of Los Angeles and graduated from Fairfax High School. He then served in the U.S. Navy during World War II, both before and during the occupation of Japan. After his military service, Mel attended the University of Southern California, where he met his lifelong love, Marilyn Wolf. During their nearly 70 years of marriage together, they raised three children: Steven, an attorney, and twins James, a dentist, and Susan, an administrative law judge.

His family now celebrates the beautiful life of a wonderful man, so well lived. People whom he never met have benefited from his caring nature, as he repeatedly answered the call to donate his rare blood type to those who needed it while undergoing heart surgery—three gallons of blood in all.

After college, Mel worked with his father at B. Formaker’s Jewelers in downtown Los Angeles. Mel then followed his dream to become a stockbroker with Merrill Lynch, where he worked for 31 years and attained the title of Vice President. He subscribed to the belief that “the customer’s interest always comes first,” and his clients, in turn, were devoted to him.

After he retired, his wife Marilyn retired as well, she from her position as a senior research attorney with the California Court of Appeal. Together they then traveled extensively throughout much of the world, always returning laden with the ample results of Mel’s talents as a gifted photographer. When home, he loved to golf, garden, and root for the USC Trojan football team.

Mel was a member of the Masonic order throughout his adult life, and he served as Master of his Masonic lodge, as a Shriner, and in other capacities.

He is survived by his beloved wife, Marilyn Formaker, his children and their spouses, Steven Formaker (Laurie Brook Formaker), James Formaker (Angel Matos), and Susan Formaker (Daniel Olivas), as well as his grandchildren, Benjamin Formaker-Olivas and Rachel Formaker, and many nieces, nephews, and cousins.

Services will be held on Monday, August 9, 2021, at 3:00 p.m., at Mount Sinai Hollywood Hills, in the Tanach Chapel, 5950 Forest Lawn Drive, Los Angeles, California 90068. In lieu of flowers, the family requests that donations be made in Mel’s memory to the Shriners Hospitals for Children at: https://www.shrinershospitalsforchildren.org/shc