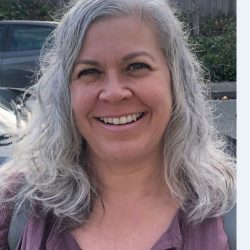 Heidi Lauer (1969-2020) passed away from acute myeloid leukemia on the morning of Wednesday April 8, 2020 at the age of 50. She spent her last days at home doing the things she loved most, including talking to her family, watching television, playing games, and cooking.

Heidi was born on August 16, 1969 to Marilyn and Martin Sanders in Los Angeles. Her sister, Jody, was born three years later. She attended elementary and middle school in the San Fernando Valley and graduated from Chatsworth High School in 1987. She received her undergraduate education at University of California, Irvine where she was part of the Alphi Phi sorority, graduating in 1991. She then received her law degree from the University of California, Davis in 1994. Later that year, she married Daniel Glaser. In 1998, they welcomed their first daughter, Eden. Three years later they welcomed their second daughter, Kara. Heidi and Daniel were eventually divorced. In 2008, Heidi married Scott Lauer. She joyfully took on the role of step-mother for Scott’s sons, Jason and Blake. She practiced family law as an attorney and mediator.

Heidi was fiercely independent and always told it like it was. She was passionate about helping others and was always available, day or night, to provide a delicious homemade meal, a ride, advice, or just to lend an ear. She always put her family first, including her two dogs, Mamba and Stella. Her devotion to her family and friends was unparalleled.She volunteered at Guide Dogs of America and was extremely involved with her temple. She was an avid reader, and could always be found talking about a great book she had just read. Sharing her knowledge, humor, pride in her children, food, and more brought her purpose and joy every day.

If you wish to donate in her memory, please visit donate.lls.org.