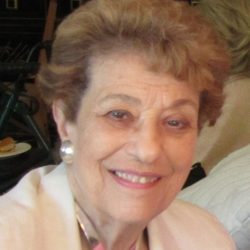 Esther Lerner Brenner passed away peacefully after a long illness on August 7, 2015, at her home in Beverly Hills, California, at the age of 84. The second child of Jewish immigrants from Palestine and Lithuania, Esther Lerner Brenner was born and raised in Washington, D.C., where she graduated from George Washington University with High Honors and was elected to Phi Beta Kappa. After moving to Los Angeles in the early 1950s, she worked as a speech therapist and teacher, while raising three sons. Esther Lerner Brenner was a longtime community activist who played leadership roles in numerous civic and Jewish organizations and causes, including serving as president of the Beverly-Angeles Homeowners’ Association and the Los Angeles Hebrew High School. After earning a Master of Business Administration from the University of Judaism, Esther worked as West Coast Regional Director for the United States Holocaust Museum and as Director of Development at Hamburger Home Aviva Family and Children’s Services. She is survived by her three sons and their wives, Mayer (Sandy) Brenner, Sunny (Susan) Brenner, and Matthew (Sarah) Brenner; and her eight grandchildren, Morrisa, Ariel, Zachary, Yonina, Jordan, Tali, Henry, and Max. Funeral services were held at Mount Sinai Hollywood Hills on Monday, August 10.Please direct donations to the following organizations: Builders of Jewish Education – https://www.bjela.org/ways-support-bje, The Jewish Healing and Hospice Center of Los Angeles – http://jhcla.org/donate.php, The Masorti Foundation for Conservative Judaism in Israel – https://donatenow.networkforgood.org/MASORTI, The United States Holocaust Memorial Museum – https://donate.ushmm.org/page/contribute/support, or The Washington Nationals Dream Foundation – http://washington.nationals.mlb.com/was/community/foundation/index.jsp?mc=donate.