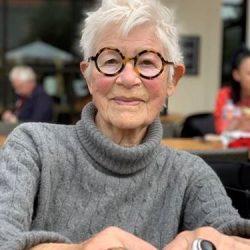 Elsbeth died of idiopathic pulmonary fibrosis, bravely, reflective of her character. She leaves Stanley, her husband of 64 years, three daughters, Toni, Clara and Abigail and four grandchildren, Ursula and Oscar, Louise and Simon.

Elsbeth grew up in Djursholm, a beautiful suburb of Stockholm, daughter of Oskar Klein, a Swedish theoretical physicist and Gerda Klein, nee Koch, who grew up in Denmark. Her paternal grandfather was the Chief Rabbi of Stockholm from 1883 until his death in 1914. She had five siblings, four of whom are still living, in Sweden with their many children, grandchildren and great-grandchildren. After completing her “Gymnasium” studies, Elsbeth earned a social work degree in Copenhagen, where she also pursued Fine Arts studies. She met her future husband, Stanley Deser, also a theoretical physicist, while he was a post-doc at the Institute for Advanced Studies in Princeton where she was staying with family friends. Eventually, they settled  in the Boston area, with frequent stays abroad,  both on sabbaticals and during the summers where they joined her family on Gotland and Oland, islands off the southeast coast of Sweden. Elsbeth studied art at the Academy Julien in Paris, then became a serious painter, maintaining painting and etching studios in Waltham, Cambridge and later in the south end of Boston.

Her canvases earned renown, and she was awarded the Maud Morgan Prize by the MFA Boston in 1998, and her work is included in the collections of Boston Museum of Fine Arts, The Rose Art Museum, The Boston Public Library, and other museums and cultural institutions.

Upon retiring to Pasadena in 2005, she stopped painting but continued pursuing her passion for art in her reading and frequenting of local cultural institutions. Elsbeth leaves a devoted family and a world full of admirers who deeply appreciated her wisdom, her unparalleled sense of beauty and her clear self-knowledge which gave us all a kind of comfort.