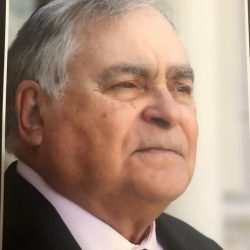 The family of Dr. Asher Thompson is heartbroken to announce his peaceful passing at the age of 84 on December 9, 2020 at Northridge Hospital in Los Angeles, California. Asher was cherished by many and will be deeply missed. He was the beloved husband of 26 years to Cathy Roland Thompson, with whom he enjoyed a life rich with family, friends, and community. Asher was a loving and devoted father to Michael (Margaret Wong), Shelly (Blake Larkin), Karen (Nir Shema) and Marcie, and a loving, devoted step-father to Rabbi David Kornberg (Debbie) and Lisa Kahn. Together with Cathy, Asher treasured and enjoyed 14 grandchildren who will miss him dearly: Ella and Jonah Thompson, Zachary, Tanner and Zoe Larkin, Kinneret, Carmel and Arava Shema, Melanie, Lorelle and Dory Grynholc, Michael and Rachel Kornberg and Ethan Kahn. Asher was predeceased by his beloved parents, Tannie and Joe Thompson and his sister Doreen. Asher remained close throughout his life to his sister Myra Robles (Carolyn Robinson), and is mourned by his cousins, nieces and nephews. Asher will also be missed by the extended Niznick family.

Asher was born on October 13, 1936 in Winnipeg, Manitoba, and grew up amongst dear friends in Winnipeg, with whom he remained close throughout his life. After graduating from the University of Manitoba Medical School in 1960, he was married to Sharon Niznick (Glass), and moved to Detroit, Michigan, where he took three years of training in internal medicine at Henry Ford Hospital. After Henry Ford hospital, he went to Salt Lake City with a National Institute of Health grant in their gastroenterology department, before returning to Winnipeg to begin his medical practice. In 1970, Asher moved to Los Angeles, where he built his medical practice, with a specialty in gastroenterology. Asher profoundly loved practicing medicine – it was not a job for him, it was a passion, a Sherlock Holms-ian mystery to be solved, and an identity. He was a caring and brilliant physician, and he was devoted to his patients, who recognized him not only for his medical services but for the way he took care of them with sensitivity and warmth; he considered himself an old-fashioned doctor.

After moving to California, Asher raised his family, and cultivated a circle of dear friends that he loved very much, some from his youth in Winnipeg, and others through his synagogue, golf club or medical practice. Asher was known, loved and admired for his warmth, intelligence, compassion and ability to spin a good story. He always encouraged his children and grandchildren to pursue their passions, whether academic, professional, creative, athletic or musical, and always tried to attend and show his support at their games, plays, performances, graduations and other live events. He shared with them his passion for studying history, travel, books, golf, theatre, photography, food, a well-told story and spending time together. He also shared his love for Jewish religion, traditions, art and food. He enjoyed dining with and entertaining his family and friends, and was known for his generosity. He was a lifelong golfer, and enjoyed watching his favorite team, the Los Angeles Kings, play ice hockey. An avid history buff and traveler, he ventured around the world, including Israel, Australia, England, Europe, Scandinavia and Asia.

Asher will be remembered for the unlimited and unconditional love and support he had for Cathy, his children and grandchildren, extended family and his many dear friends. He will be deeply missed, but in our grief, we find gratitude for our immense good fortune having had Dr. Asher Barry Norman Thompson in our lives.