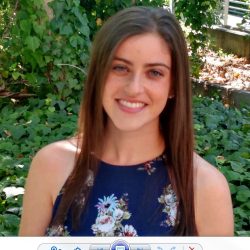 Arielle was born in Castro Valley, California, on June 5, 1996.  She grew up in Fremont, and then later in Mountain View, California. At the age of 11, she received her Black Belt in WCWMA Karate, and her brother Cody Davis was born. Arielle was an avid, hard-working, brilliant, and successful student, and also contributed to her community in many ways, including working as a volunteer and later interning at the Ronald McDonald House in Stanford, California. Arielle was the Yearbook Editor and Mural Club President at Kehillah Jewish High School, in Palo Alto, California, from which she graduated in 2014 with a 4.13 GPA! Arielle then went on to attend Pitzer College in Claremont, California, from which she graduated in 2018 with a BA in Psychology and a minor in Sociology.  Arielle was an extremely gifted writer, public speaker, and communicator, and was also proficient in Spanish, Hebrew, and American Sign Language. In addition to her academic excellence, Arielle was deeply involved in extracurricular and service activities at Pitzer, where she was a member of Psi Chi, Pitzer Psychological Student Association, Spoonie Alliance, Judicial Council, Illness and Difference Alliance, and the West Hall Council.  Arielle also worked as an Online Tutor at Chegg Inc., from 2016 up until just a few weeks before her passing and was much in demand for her expertise, compassion, and great ability to explain, educate, and inspire.

After Pitzer, Arielle worked as a Family Resource Coach at Children’s Hospital Los Angeles (CHLA) and in 2019 began the UCLA Extension Online Patient Advocacy Certificate Program.  Arielle excelled in her academic and professional pursuits while facing tremendous personal challenges in dealing with her various autoimmune disorders, in particular MCAS (Mast Cell Activation Syndrome), which was first identified in 2007, is exceptionally rare, difficult to diagnose and treat, poorly understood, and sadly, as of yet, incurable. Arielle was an exceptionally articulate, knowledgeable, hard-working, and compassionate patient advocate, educator, and support to her clients, and to so many other patients around the world struggling with MCAS/POTS/EDS, both in person, online, and through her blog: “ABCD MCAS what? Arielle’s Journey with MCAS, POTS and EDS” (http://abcdmcas.blogspot.com/).

Arielle was a lovely, upbeat, and caring young woman, on her way to a career helping other people struggling with disease. She was a strong, caring, and compassionate warrior for patients and for the causes she supported. With your gift, you can help Arielle continue her work, in memory of our beloved Arielle and so many others suffering from MCAS. You can give directly to a memorial fund we have setup for Arielle Davis at: https://pf.arreva.online/arielle-davis