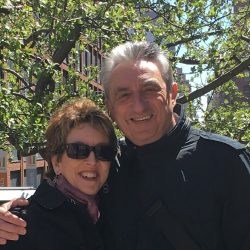 Alex was born in Kyiv in the Ukrainian S.S.R. on November 15,1948, to Morris Litwak and Cyma Reichik. The family was able to emigrate to Poland in 1959 based on Cyma’s pre-war citizenship, and lived in a displaced persons camp and then in Lodz until, with the assistance of the Hebrew Immigrant Aid Society (now HIAS), they were able to make contact with family of Cyma’s living in the United States. In 1961 the family, which now included his brother Bill, boarded a ship in Gdansk, sailed across the Atlantic and through the St. Lawrence Seaway. He entered the United States at Port Huron, MI; the family continued their travel by train and rode across the Great Plains to Los Angeles, where earlier generations of Cyma’s family had settled and where Alex spent the rest of his life.

Alex was the first in his family to learn English and to attend high school, college, and law school. After an initial three semesters in an English immersion program at Mt. Auburn Junior High School, he transferred to Bancroft Junior High before graduating from Fairfax High School in 1967, from UCLA in 1971, and from the McGeorge School of Law in 1974. That same year, he became a naturalized citizen, passed the bar, and began the practice of law. He was a successful contract and real property attorney in California for over 45 years, arguing before courts at all levels of the California judicial system. Alex was an American for almost six decades and loved this country from the moment he set foot here; for the opportunity it gave him and his family, and in spite of all of its faults and shortcomings, which he railed against in trust that it could be better. He also had a deep passion and respect for the law – for its systems, for its ability to right wrongs, and for how it can work for people in need.

Alex was married to Jody Erica Feerst Litvak, also of Los Angeles, for over 35 years. Alex and Jody met in 1981 and were married on October 14, 1984. Together they had two children – David Abraham, born in 1989, and Audrey Michelle, born in 1992. More than anything else, Alex was fiercely, deeply proud of, doggedly loyal toward, and overwhelmingly loving to Jody, David, and Audrey, for whom there was nothing he was not prepared to do. Alex was never happier than when he could talk about the successes, accomplishments, and merits of his wife and children, except when he could speak with and see them himself, and could always be trusted to snap pictures of his family at every opportunity. He had a razor-sharp wit, a delightfully bone-dry sense of humor, a sentimental streak a mile wide, and an abounding adoration for those indispensably closest to him.

Alex is survived by his wife, Jody; his children, David and Audrey, and David’s fiancee, McKinley Sherrod; and his brother and sister, William Litvak and Beverly Kline Horton. In lieu of flowers, the family respectfully requests that donations be made in Alex’s name to HIAS at www.hias.org.