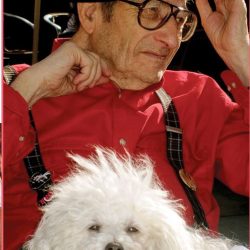 Albert Sax passed, August 13, 2020 of natural causes at his home in West Los Angeles. He lead an Interesting and fascinating life and enjoyed
sharing his experiences with his family and friends. While based in England, he remembered watching the war ships leaving for D-day. He served
in the air force 480th Air service group during World War II, and was in Paris when Germany surrendered. He later married Denyse Sax and had
four children, Jeff, Lloyd, Ken and Linda and has a granddaughter Lexi Kenna Sax. His wife passed away on August 13, 2007. As a teenager, he
befriended Marilyn Monroe, and has remained a fan ever since. Albert spent his career dedicated to aerospace and designed the rocket
engines for Apollo 11, the first manned mission on the Moon and the Space Shuttle. He was very much into the French Culture and during the l
ast four years of his life, a friend of the family and companion Judith D’ Andreis, took him to the French institute events, enjoying French movies,
sing alongs, Bastille Day at the Sofitel Hotel and many activities at the Culver Senior Center, Beverly Hills Adult Club. Albert enjoyed having l
unches and dinners with his family and friends. He was loved by so many he touched, and we will all miss him greatly.